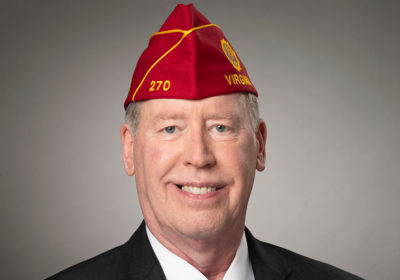 Brett P. Reistad was elected national commander of The American Legion on Aug. 30, 2018, in Minneapolis during the organization’s 100th national convention. He has been a member of the nation’s largest veterans organization since 1981.

A resident of Manassas, Va., Reistad is a life member and past commander of Post 270 in McLean. The Department of Virginia reached an all-time high in membership while he served as department commander from 2005-2006. He retired as a lieutenant with the Fairfax County Police Department after 26 years of service and began a second career as a law enforcement services coordinator for the Regional Organized Crime Information Center of the Regional Information Sharing Systems Program, a congressionally funded law enforcement investigative assistance program of the U.S. Department of Justice. He holds a B.S. degree in Criminal Justice from Virginia’s Bluefield College.

Reistad’s American Legion membership eligibility is through his honorable Vietnam War-era service (1974-1978) as an active duty U.S. Army infantryman where he served with the Presidential Salute Battery of the 3rd U.S. Infantry Regiment (The Old Guard) at historic Fort Myer, Va. He participated in the inaugural ceremony for President Carter and other high-profile ceremonies. He has since been honored as a Distinguished Member of the Regiment.

Reistad has served at every level of The American Legion. He is a past president and honorary life member of the National American Legion Press Association. He recently completed a six-year appointment as chairman of the Department Legislative Committee and two three-year terms as a gubernatorial appointee to the Commonwealth of Virginia’s Joint Leadership Council of Veterans Service Organizations where he helped coordinate the input of 23 veterans service organizations in crafting veteran-friendly legislation and advocating the proposed legislation before the governor and General Assembly. He is also a tenured past department historian and was recently bestowed an honorary life membership by the National Association of Department Historians of the American Legion.

His theme as national commander is “Celebrating Our Legacy,” with special emphasis on the organization’s centennial.