Humanizing The World Refugee Crisis At The Veterans Building 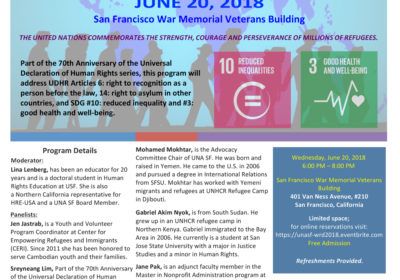 Part of the 70th Anniversary of the Universal Declaration of Human Rights series, this program will address UDHR Articles 6: right to recognition as a person before the law, 14: right to asylum in other countries, and SDG #10: reduced inequality and #3: good health and well-being.
Program Details

Moderator: Lina Lenberg, has been an educator for 20 years and is a doctoral student in Human Rights Education at USF. She is also a Northern California representative for HRE-USA and a UNA SF Board Member.