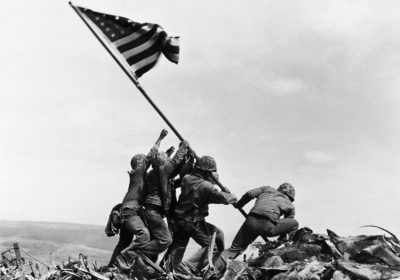 It was the bloodiest battle in Marine Corps history, and photographer Joe Rosenthal was right in the middle of it.

It was on the fifth day of that battle, on Feb. 23, 1945, when Rosenthal captured the most iconic photograph of World War II. The image, which was published two days later on the front page of newspapers across the U.S., showed six Marines raising an American flag on Iwo Jima.

“It was an extraordinary photograph that came at a very opportune time,” said Tom Graves, historian for the San Francisco-based Joe Rosenthal Chapter of the USMC Combat Correspondents Association. Graves is organizing an exhibit showcasing Rosenthal’s work that will open this year at the San Francisco Veterans Memorial at 401 Van Ness Ave. in San Francisco. The exact opening and closing dates have been delayed due to the pandemic and will be rescheduled when the building reopens.