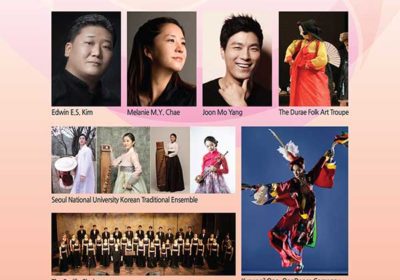 The K-Concert, its 3rd celebration this year, has been playing a role to promote the excellence of the Korean culture to the American mainstream society. Particularly, it has been conveying the beauty of Korean music to the audience of San Francisco and Northern California through the extensive Korean music and the performance of prominent artists.

Next, the Pacific Choir of San Francisco will form an impressive ensemble.

Furthermore, invitees will be able to take delight from original Korean traditional music performance by some students who are majoring in Korean classical music from the prestigious Seoul National University.

A special session is arranged where the public can come to know how much Korean music is taking center stage under the international spotlight with the popularity of K-POP which is sweeping across the globe. In this session, Kyungil Ong dance group will show a dance performance combining K-Pop and traditional dance.

Next, the Durae Folk Art Troupe will express the dynamism of Korea by dancing Talchum (a mask dance).

A special guest, Joon Mo Yang, a musical actor who has sensational popularity in Korea after impressively playing a role of Joong-Geun Ahn, a patriotic martyr, should pique the interest of many. Actor Yang will deliver music of various genres to the public in the K-Concert as one of the representatives of musical stars in Korea. He will sing several classic songs from musicals and speak to the current status of Korean popular music.

All information regarding the 2019 KOREA WEEK can be found on the Consulate General of the Republic of Korea in San Francisco’s official website or on Facebook. Please complete the registration online in advance.

Any inquiries regarding this event can contact the Korean Consulate by calling 415-921-2251 or via email sfkoreancg3@mofa.go.kr.

The Consulate General of the Republic of Korea in San Francisco kindly requests the press and major Korean associations to give their support so that 2019 KOREA WEEK can be a success. The Consulate General hopes not only to promote Korean culture to the Bay Area but also to make the Korean community feel Korean pride.