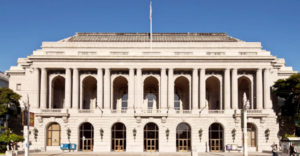 Join us on Veterans Day to honor the San Francisco veterans who died in service in the Vietnam War and their sacrifice with this ceremony. The Memorial, originally installed in 2001 at Justin Herman Plaza, suffered from weather and vandalism. Has been moved to the San Francisco VETERANS BUILDING. It will be rededicated on Veterans Day, November 11, at 4pm, 2016.

In addition, the rededication will recognize five service members whose names were omitted from the original memorial. The monument has been recast to include those men’s names. This effort has been led by Swords to Plowshares, the American Legion War Memorial Commission, and Country Joe McDonald.

“It has been clear for years that the old site for this important tribute to those 168 San Francisco men who were killed in the Vietnam War was not ideal. Relocating the memorial to the recently restored War Memorial Veterans Building is much more appropriate and respectful,”

Relatives Of SF’s Vietnam War Dead Sought For Memorial Ceremony Veterans groups are looking for relatives of San Francisco servicemen killed in the Vietnam War to take part in a ceremony unveiling a new memorial to the fallen. San Francisco Chronicle By Kevin Fagan, October 31, 2016. Article includes all the names of the servicemen.

ON VETERANS DAY THESE TWO EXHIBITS ARE ALSO OPEN