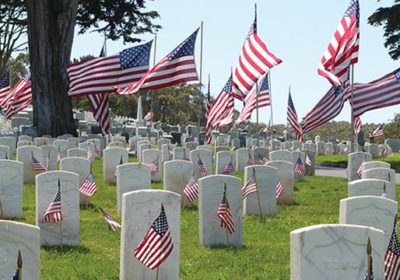 150th Memorial Day Ceremony Commemoration, Monday, May 28, the Presidio Trust, the City of San Francisco & the Department of Veterans Affairs invite you to be part of the official City & County of San Francisco Memorial Day Observance. This year marks the 150th anniversary of the Presidio’s participation in the city’s annual ceremony, dating back to the establishment of this national day of remembrance in 1868. The ceremony honors the one million Americans killed while serving in the U.S. armed forces & connects the public to the commitment & sacrifices made by military personnel, veterans, & their families.
Schedule
9:30am Flag Raising Ceremony by National Park Service Rangers, Pershing Square (across from the Presidio Officers’ Club at 50 Moraga Avenue)