World War One History In The Veterans Building 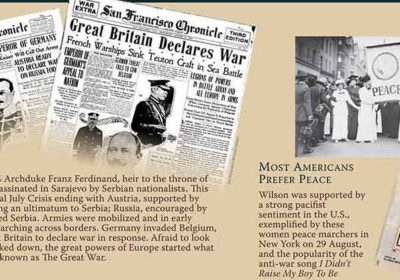 The Great War Revealed In San Francisco: 100 Years of Disruption

From May’s Memorial Day weekend May 26-28 through the end of 2018, a unique and remarkable display consisting of eight 8-foot square banners can be viewed in the lobby outside of the Herbst Theatre and American Legion Veterans Hall in the War Memorial Veterans Building at 401 Van Ness Avenue, across the street from San Francisco City Hall.

This display is part of the centenary recognition of the Armistice that ended what was then called The Great War. The War Memorial Veterans Building was built to honor and remember the veterans who served in the American Expeditionary Force (AEF) from 1917-1918.

Americans today know it as World War One. 100 years ago it started as The Great War among Europe’s major powers. Eventually it embroiled more than 30 nations from around the world, including the United States.

These eight banners below tell the story of America’s initial desire to stay out of a foreign war in 1914, the growing sympathy for civilian victims and refugees, horror at the unprecedented numbers of casualties, and finally the United States joining as a co-belligerent in that war. 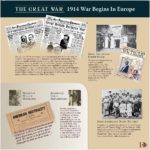 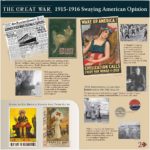 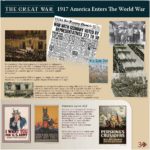 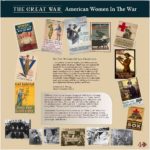 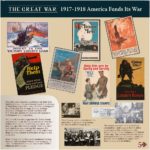 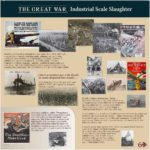 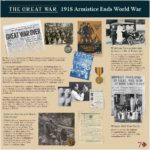 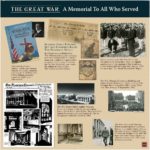 It was the first war that witnessed the widespread use of submarines, airships and airplanes, huge artillery cannon, machine-guns, tanks, and poison gas. The lethality of these weapons drove armies underground, living for years in dugouts and trenches, separated by a desolate “No Man’s Land” of shell holes and barbed wire.

Prosecuting the war required millions of American women to work on farms, in factories, and in many previously traditional male jobs. These women replaced the nearly five million American men who volunteered or were drafted into the U.S. Army and Navy. After 70 years of lobbying to get the right to vote, women’s service in the war provided key political leverage to get Congress to pass the 19th Amendment in 1919, with states’ ratification in 1920.

The banner display will be augmented throughout the summer with videos and exhibits of artifacts and photographs. Web pages are now in development to provide more details and information, and to explain how The Great War disrupted early 20th century militaries, economies, technology, politics, national boundaries, and social institutions. World War One’s outcome led to World War Two and the Cold War. The Great War continues to have disruptive effects on the world today through the rise of oppressive ideologies, unstable countries in the Middle East, and terrorism.

The World War One Armistice Centennial Committee that created The Great War display was authorized by the Performing Arts Center Foundation. The Foundation administers the War Memorial Buildings.